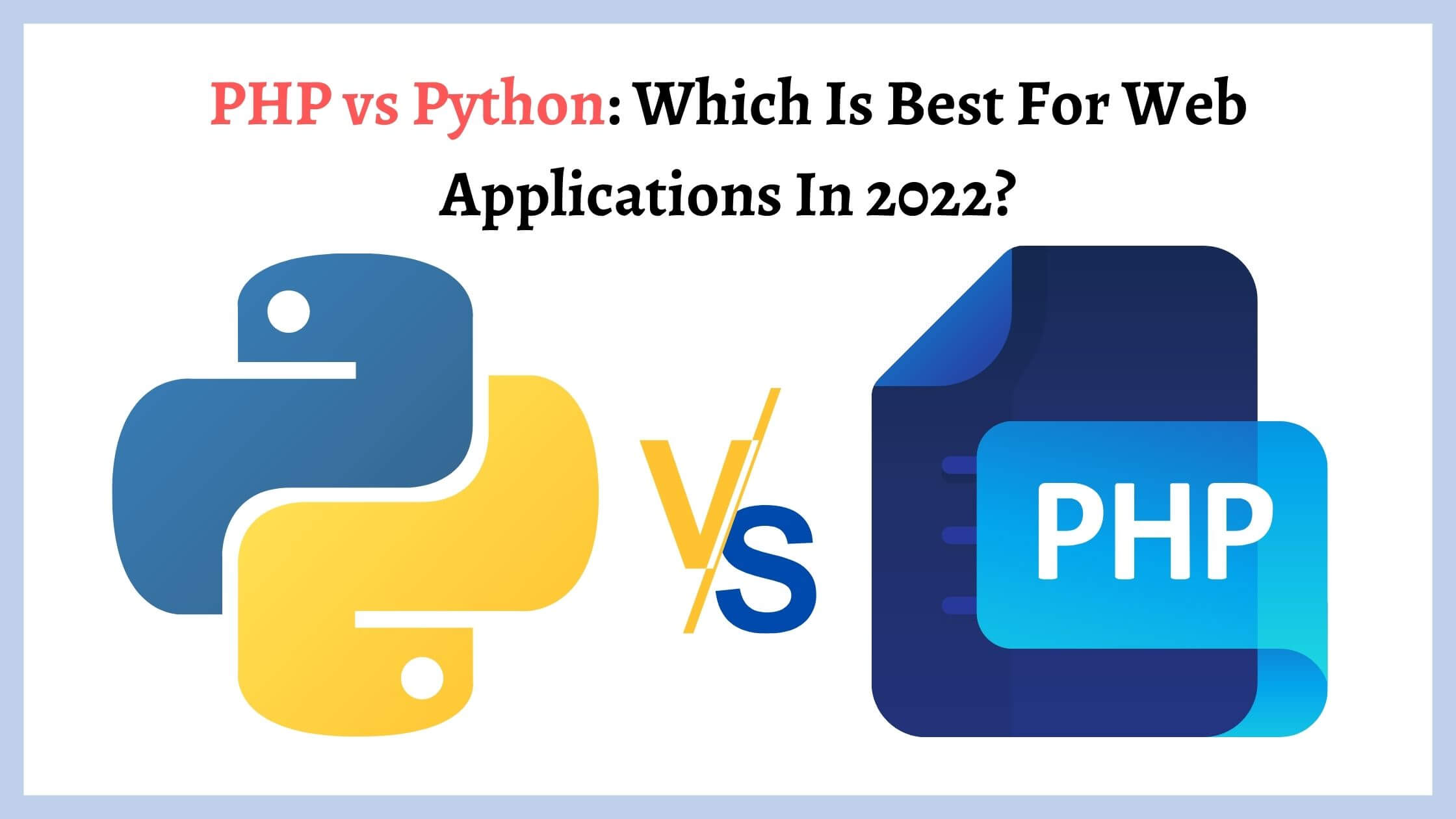 PHP vs Python: Which Is Best For Web Applications In 2022?

PHP vs. Python- which is best for web application development in 2022? The final selection depends upon your project requirements. Let’s find out which one is the best with a comparison.

The market is about pleasing and interactive websites and web applications today. And, every other business has its tailor-made website or web app to achieve business goals. PHP and Python are great coding languages to be used for web development. Indeed, PHP and Python are widely used for web and backend development projects. Surprisingly, these coding languages have gained tremendous popularity in web development in a short period.

Choosing a side is difficult between PHP and Python

PHP vs. Python conundrum has kept many developers and entrepreneurs on their toes because choosing a side isn’t a cakewalk. Each of the two languages has excellent features and tools to develop advanced web apps or websites. Further, you can easily find a top Python web development company if you choose Python for creating your web app. Likewise, finding a PHP developer isn’t a hurdle that makes it challenging to decide which language to choose.

Both these languages are excellent when considering web development. However, there are various differences between Python and PHP that make them suitable for different requirements and companies. Here we will shed light on their differences and find out which is better for web development: Python or PHP.

Let’s delve deep into the PHP vs. Python dilemma to find the winner.

PHP, which stands for Hypertext Preprocessor, is an open-source server-side scripting language. It is widely used in creating dynamic web solutions and dynamic web pages. According to a technology survey, PHP is used by almost 78% of websites on websites that use a server-side language. Hence, eight out of ten websites using server-side technology use PHP somehow. The language is a good choice for creating interactive websites.

With PHP, you can create files, read, write, open, close, and remove them on a server. It collects information and allows websites to receive and transmit cookies. It is also used for data encryption and user access control. Besides core PHP, you can utilize the best PHP framework for web development to create the desired web solutions. Also, there are CMS based on PHP like WordPress, Drupal, Magento, etc.

Python is a general-purpose, high-level programming language. It is used for developing websites, web apps, software, and backend systems. The syntax and design of the language are focused on code readability and reusability. It has an expressive and clear syntax that makes code written in Python eye-catching, readable, and efficient.

PHP vs. Python: A Complete Comparison

When it comes to PHP vs. Python for web development, there are many factors like performance, frameworks, simplicity, etc. Hence, we must analyze these factors to understand which one is better in Python vs. PHP. Let’s look at every aspect briefly and sort out the best option.

Both languages are compatible with various operating systems. Also, both of the languages are object-oriented. But when we talk about ease of use, Python beats PHP. PHP appears with a rigid syntax, making this language complicated and a little hard to understand. The prior versions of PHP were a bit complex.

Whereas Python is good in readability, which makes it relatively simple to understand. The codes written in Python can be read and made clear, which also assists in clarifying the debugging process.

Python is fast and powerful. Python’s Just-In-Time compiler makes it faster than its rival, PHP. One of the main benefits of JIT is that once the files get assembled, there is no further requirement for them to be recompiled.

On the other side, PHP 5. x, its earlier version, was much slower-moving than Python. Although, the launch of PHP 7. x brought a change, thereby improving the speed of apps significantly. Along with PHP 7, Zend Engine 3.0 was launched, creating PHP 7 two times quicker than its predecessor.

Businesses are continuously looking to fasten their digital transformation journey in today’s highly technological world. You are required to develop an MVP as soon as possible to acquire funding for another new product development. And this is the fundamental reason you need to select the correct language for your web app.

Python comes with a set of third-party libraries, modules, and packages to complete the projects quickly. For example, Django is one of the most prominent frameworks for web development written in Python. It uses the MVC (model-view-controller) approach. Django web development with Python enables developers to develop applications with excellent reusability quickly.

PHP is also available with its tools that include frameworks and libraries. In PHP web development, the most renowned framework is Laravel, which also embraces the MVC pattern and comes pre-packaged with various useful features for web development, including authentication, templating, routing, and more.

When we discuss security, Python is the most suitable choice for businesses. For example, the Django framework comes up with built-in security features, which assist in protecting the app from various sorts of security threats.

Moreover, various government agencies such as the CIA depend (heavily) on Python as their secret hacking tool, as per WikiLeaks. Besides the CIA, numerous other US organizations that store sensitive data utilize Python as their backend language: Department of the Navy, National Institute of Standards and Technology (NIST), Department of Education, etc.

On the other side, PHP has had a horrible history regarding security. Even though most of the security issues have been acknowledged and sorted out due to excellent community support, PHP still falls short in security compared to Python.

In terms of scalability, the application built on the Python web development framework provides high AI and ML capabilities, which leads to high scalability and simple adaptation to evolving trends.

For instance, you can develop scalable applications by utilizing the Django framework. This framework comprises a series of wired-up and prepared elements decoupled (means independent from each other). Therefore, these elements can be unplugged and restored as per the changing demands of the business.

For instance, Instagram features the world’s most significant deployment of the Django web framework. Python’s reputation for simplicity and practicality led the social networking service to choose Python over PHP. On the contrary, PHP is not open to evolving demands and new trends. PHP lags behind Python applications despite its continuous improvement, thus failing the ‘Python vs. PHP: Scalability’ battle.

PHP Vs. Python: Which one to choose?

After comparing both languages on every essential parameter, it is still challenging to select one programming language between both of them. Both PHP and Python are excellent in their ways. Both are superb whether we talk about features, library support, functionalities, documentation, and other factors. It’s not about discussing PHP Vs. Python; language selection for web development heavily depends upon your business requisites. Web development using Python is the most innovative option if your app idea requires machine learning coding.

Essentially, the programming language involved in your web development project is determined by your requirements. Make sure you have precise requirements, as the backend development will entirely depend on them.